Volvo Buses – Introducing the latest addition to their electromobility range 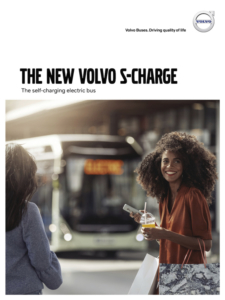 Volvo Buses – Introducing the latest addition to their electromobility range

The new Volvo B5L S-Charge, a self-charging electric bus. The electric bus, using Volvo’s proven hybrid driveline, has been upgraded with new capabilities and can now drive silently and emission-free on electricity at higher speeds and cover longer distances than before.

The Volvo B5L S-Charge delivers an environmentally sustainable electric solution to the Australian market that is ready to be deployed immediately – without the need to wait for additional infrastructure to be built.

The Volvo B5L S-Charge runs in electric or hybrid mode and can operate on up to 100% biofuel. The batteries are charged via both the energy that is captured through braking regeneration and the small engine. As a result, the Volvo B5L S-Charge can be used on virtually any bus route both in urban areas and in the suburbs.

While there is a strong push towards electric vehicles within the Australian market, electricity generation in itself has a substantial carbon footprint. In saying that, the measurement of “well-to-wheel” becomes an important factor to determine the true impact of a vehicle’s carbon footprint. The term ‘well-to-wheel’ refers to the sum of emissions released from the production of energy such as extracting oil or generating electricity to the vehicle being driven. In Australia, that means applying the well-to-wheel methodology, that the Volvo B5L S-Charge produces a lower carbon footprint than many grid charged electric vehicles. This is especially true for New South Wales, Queensland and Victoria.

With the Volvo B5L S-Charge we are expanding our customers’ possibility for harnessing the benefits of electric power while at the same time retaining the impressive flexibility offered by hybrid buses.  The new S-Charge model can be deployed on almost any rout since no charging infrastructure is needed, which enables fast implementation and improved operational efficiency for our customers.

The upgrade includes improved connectivity via Volvo’s connected service offering, which allows for geo-fencing and Volvo’s Zone Management function, which makes it possible for the operator to program the bus so it automatically switches to electric within selected areas and it can have the speed regulated without driver intervention.