A LONG HISTORY IN AUSTRALIA 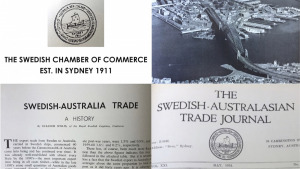 Bobbing gently at anchor in Sydney’s Darling Harbour the transatlantic Swedish steamship ‘Indianic’ had the honour of hosting the inaugural meeting of The Swedish Chamber of Commerce in Australia, New Zealand and the South Sea Islands, the date was 13 March 1911.

Barely 10 years after our fledgling nation had been formed and following a scant four years behind the formation of the Swedish Chambers of Commerce in New York and London, it imbues our Chamber with the prestigious title of being the third oldest in the world.

Commercial enterprise in our waters was not a recent occurrence in 1911, ships from Sweden and other far flung nations had been plying their trade here since the late 1800’s. The convict settlement established here by Great Britain was a great attraction for the commercially minded Swedish sailing ships and the 1901 Federation merely strengthened these commercial ties. 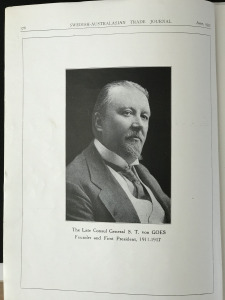 Europe in 1911 was in turmoil and the political situation curtailed the Swedish trade with its European neighbours. As the state of affairs plummeted into the First World War in Europe Sweden looked with renewed interest across the Atlantic to Australia for trade. Despite great odds goods and merchandise still found their way across the war zone, frequently through British links to Australia and more often than not, with the blessing and assistance of the Chamber.

The end of WWI saw a significant number of Swedish business men and women living in Australia often as representatives of Swedish companies and manufacturers. The Swedish Chamber of Commerce in Australia, New Zealand and South Sea Islands Inc., was active in promoting the commercial interests of this sector facilitating the expansion of the Swedish business interests in the Southern Hemisphere. One early director of the Chamber, Mr Nelson of Nelson and Company, the indent merchant and manufacturer’s agent, represented 9 Swedish suppliers. Another Swedish backed company Sonnerdale, imported Swedish machines and parts, which were incorporated into the finished product manufactured in Sydney and sold locally. 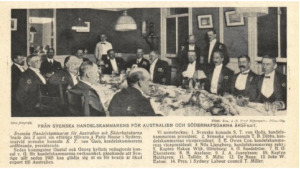 Swedish trade with Australia has historically favoured Sweden, a trend that has strengthened over the years. We as a primary producer have always created an attractive destination for Swedish manufactured parts and goods. This was certainly the case in 1930 where the two way trade was two to one in favour of Sweden but the commercial arrangement was soon to be threatened once more by world affairs as WWII erupted and threatened the possible cessation of exports from Sweden reaching Australia.

The foreign policy of neutrality adopted by Sweden during the war, coupled with its geographical position compounded the problem. As Scandinavian neighbours and Russia either fell to the German Reich or formed an allegiance with the aggressor, Sweden was virtually locked in.

Australia however was not capitulating quietly, Captain Lundgren, a strong president of the Chamber for 20 years, supported by fellow directors actively pursued avenues to keep the trade going to survive this commercial glitch. The Chamber, with headquarters in Sydney, regularly produced bulletins and publications for members closely monitoring changes in the Australian economy and opportunities across the sea. It took on the role of a trade facilitator between Sweden and Australia keeping the lines of communication open by mail and cables. New Guinea added to the Southern Hemisphere’s attraction offering opportunities for planters and traders to settle in the area. One of the early Swedish Directors of the Chamber, in fact, lived in New Guinea and with numerous agencies for Swedish suppliers/ exporters to New Guinea and the neighbouring South Seas islands.

The completion of WWII heralded a significant strengthening of bilateral trade between our two nations. Exports from Sweden to Australia rose markedly and several Swedish companies recognized the business opportunities on offer in the Asia Pacific region by establishing their own offices with Swedish staff on our shores. Wool jumped to a record price in the late 50’s early 60’s and Australia, with a merino sheep population exceeding 100 million, was literally “riding on the sheep’s back. 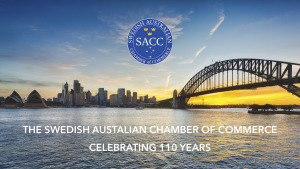 Today the good work of the Swedish Australian Chamber of Commerce lives on, the astute foresight of over a hundred years of a hardworking Board, Chapters, Committees and a full-time General Manager sees us celebrating 110 years of successful development and expansion of the Swedish-Australian business network. We now look forward to another hundred years of assisting and encouraging bilateral relations between Sweden and Australia in a sustainable and exciting global setting. 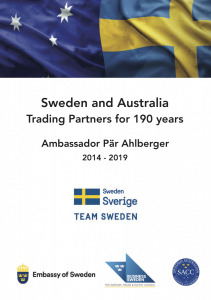 Read more about the history of the Chamber and the bilateral relations: