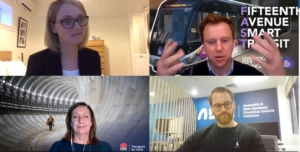 The year of 2020 has been a year of major change in ways we could never have imagined. At the beginning of 2020 the Embassy was deeply engaged in what was going to be one of the busiest years in a very long time. Smart Cities was one of the highlight promotion areas for Sweden in Australia with a high-level delegation to arrive from Sweden attending a seminar in Sydney in April.

With the escalation of COVID-19 in February/March the pandemic put an abrupt halt to travel and almost everything had to be cancelled including the Swedish delegation.  Once the initial readjustments were done it was clear that “Team Sweden Initiative – Smart City Australia” should go ahead, in a digital form.

Embassy of Sweden and Business Sweden have worked closely on the “Team Sweden initiative – Smart Cities Australia” since November last year. The initiative aims to provide Swedish companies with an overview and understanding of the Smart City landscape in Australia as well as the exiting opportunities and future investments that lie ahead. Business Sweden took lead on the move into a digital platform.

The digital “Smart City Initiative” was presented over three modules in the form of webinars, the first and introductive webinar took place in June where representatives from the Federal, State and Local Government gave an overview of “Smart Cities Australia” such as the “Australian Smart City Plan” and the “Nine City Deals”.

In the successive two modules held at the end of August/ beginning of September, focus was on the Western Sydney City Deal and other adjacent business opportunities and key milestones within. Followed close by five digital roundtable discussions focusing each on Transport, Advanced Manufacturing, Healthcare and Digital Infrastructure and Sustainable Cities.

The webinars and breakout sessions have been highly valuable facilitating knowledge exchange, establishing new partnerships and exchange platforms that plan to take shape. A concluding module is being planned with the aim to highlight the Swedish approach to Smart and Sustainable Cities for the Australian stakeholders that have participated in the previous modules.