Dear friends,
The time has come for me to take farewell after five intensive and stimulating years in Oceania. My family and I will return to Sweden in August. As Team Sweden Australia we have relaunched a structured and long term Trade, Investment and Sweden Promotion in the region. We leave an important legacy.

Australia is now Sweden’s 4th largest export market outside Europe. Behind the US, China, and Japan. Our exports to Australia have increased by 57% since 2014. Swedish related companies in Australia have some 20.000 employees, generating 60.000 jobs.

Last year we commemorated 190 years of trade relations between Sweden and Australia. SACC is one of the oldest national chambers of commerce in Australia, soon celebrating its 110th anniversary.

All successful trade promotion is based on three necessary preconditions:

These preconditions did not exist in 2014. It was a great weakness. Since then we have taken a series of initiatives to strengthen all these three fundamental factors.

To understand the local footprint

We have presented two Swedish Business Footprint Reports and a Business Climate Survey which have proved invaluable. We also contributed to a Swedish FTA-report. I recommend that the footprint report and the Business Climate Report are updated in 2019 or early 2020.

We have established Team Sweden, a Business Support Office and the obvious honorary role for the Ambassador in the Board of SACC. We have opened chapters of SACC in Melbourne and Perth. I hope Brisbane can also be added to the list. Our Honorary Consuls are engaged more than ever in trade and Sweden promotion. We have organised a series of trade missions. The Swedish Business Awards is now a joint collaboration between the Embassy and SACC. The Embassy contribute with articles to Swedelink. A publication on our proud historic trade relations has been published.

We give priority to the Mining, Health and Defence & Security sectors. We have established a railway cluster. We also focus on the negotiations on Free Trade Agreements and the implementations of the Sustainable Development Goals.

We have, in a similar way relaunched the Sweden Promotion in the region with a few overall themes. The Raoul Wallenberg exhibition To me there’s no other choice toured Australia for four years. The Swedish Dads exhibition and project will now be launched in New Zealand after the success in Australia. The Solander Project is the single most extensive Swedish project in New Zealand ever. It will arrive in Australia in May 2020 and later tour the very north of Sweden. We connect the Arctic and Pacific Regions in a unique way. It was a great privilege to become the first Ambassador of Sweden to the entire South Pacific.

We have certainly achieved a lot. Let me thank you for your friendship and support. It has been a privilege to collaborate with you, also in the loose network “Friends of Pär”. I wish you all the very best for the future.

Once again we are very excited to be able to invite members and guests to this end of the year in person event after months of lockdown and virtual events.

As we enter the last stretch of 2021, join the Swedish and Norwegian Chambers of Commerce in Perth WA for a Christmas Sundowner on Wednesday 1 December at Reyes Lounge 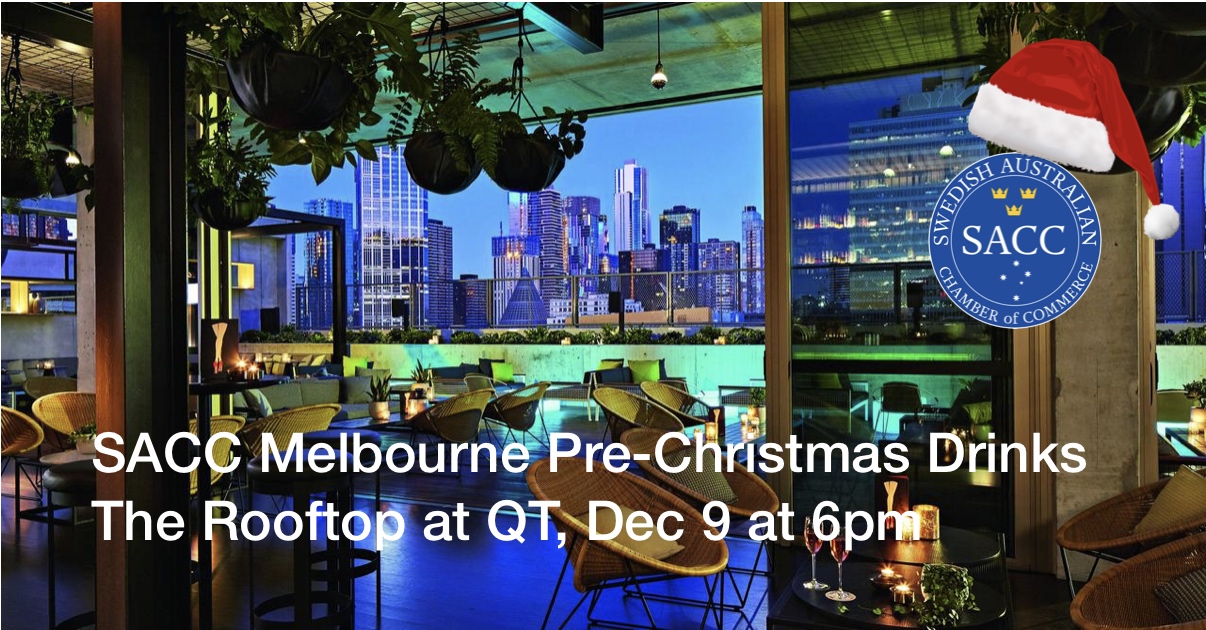