On the 29th of September SACC and the Australian Business Council of Sweden joined forces and delivered, for the first time ever, a joint webinar to its members both in Sweden and in Australia.

Special Guests, HE Bernard Philip Australian Ambassador to Sweden and HE Henrik Cederin, Swedish Ambassador to Australia, were joined by Martin Ekberg, Trade & Invest Commissioner and Country Manager to Australia, New Zealand and the Pacific Islands and Jennifer Mackinlay, Senior Trade and Investment Commissioner for UK, Ireland & Nordics, in a discussion about business and investment trends in Australia and Sweden in a post-covid-19 world.

This historic event was opened by the two Chairmen of the Chambers, Jan Gardberg and Warren Campbell, who jointly offered a warm welcome to the audience, listening in from both sides of the world.

Over the past six months, SACC has through a number of webinars, explored the consequences and the impact that covid-19 has had on business and trade and what businesses have learned from this pandemic. These webinars have been including representatives from many different sectors, offering different aspects and what has been clear throughout these discussions is the need for businesses and individuals to adopt and transform and that trust, inclusion and collaboration will be lighthouses to guide the way forward. 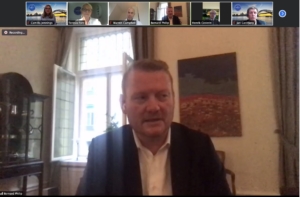 “We have also seen countries looking inwards which in part, is understandable, but it has also led to unfortunate actions like restrictions on the flow of medical supply as we saw early on in the crisis. There is also a challenge for policy makers as they wrestle with important policy matters like digital trade or climate, to navigate the right balance between good regulation and then actions that stray over to protectionism” said Ambassador Philip. “The broader risk in all of this is the possible intersection between protectionism and geopolitical competition, where they can intersect in a destabilising way. So, I think we do have to recognise that it is an environment that we have to work very hard to manage” continued Ambassador Philip. Ambassador Philip highlighted that there still are some bright spots. Australia has a renewed focus on multilateralism, including its engagement with the G20, OECD and WTO, which is more important than ever. One example of Australia’s support of multilateralism is the covax facility that will provide equitable access to the vaccine when it comes.

Australia and the European Union is continuing to make good progress on the Free Trade Agreement negotiations. Ambassador Philip concluded that “The overall picture is one with encouraging signs”. There are some adjustments that are sensible that could point to increased protectionism, in terms of policies, whether it is building better resilience in supply chains or from a national security perspective, giving greater attention to investment screening. However, “Australia’s view, a view I believe also shared by Sweden, is that this has to be done within a construct of support for free trade,” said Ambassador Philip.

Europe seems to have doubled down on its commitment to a Green Deal, while the Australian Government has just released its first Low Emissions Technology Statement. This presents opportunities for business and investment between Australia and Sweden. Ambassador Philip said that this area is “One of the most exciting areas of the relationship between Sweden and Australia, and more generally between Europe and Australia”. There is a strong commitment in Europe for sustainability and emissions reduction as a central part of the post- covid-19 recovery, which was highlighted in its revised 2030 target but also seen through the role that fiscal stimulus can play in delivering emission reduction targets. Ambassador Philip is recognising an exciting trend in the Nordics around decarbonisation and recognises that there is a powerful sense of companies seeing a competitive advantage of being an early mover in this space. “There is a similar movement in Australia where we really are on an accelerated drive for emissions reduction”. In Australia’s recent Low Emissions Technology Statement, there is a focus on five priority technologies and looking across these areas, there are plenty of complementarities between Australia and Europe. On a political level, one group that Australia joined last year, is the Leadership Group on Industry Transition led by Sweden and India, which presents a good platform for change. 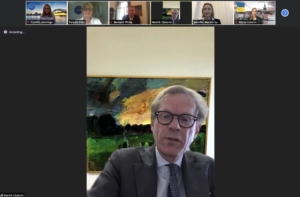 From a Swedish perspective, Ambassador Henrik Cederin shared his perspective on the opportunities and focus areas for business and trade post the pandemic. “From a political perspective, the covid-19 crisis which has led to a shift for online meetings which in turn has led to very good interactions [between Australia and Sweden] with a number of meetings taking place even at the very highest level which in turn bodes well for a good corporate involvement,” said Ambassador Cederin. Whilst there has been a slowdown in visitors from Sweden, online exchange has exploded, which is a promising sign of increased cooperation between Sweden and Australia. The Ambassador also referenced the existing strong position of Swedish businesses in Australia with more than 200 companies with an established presence in Australia, employing some 20,000 people. Companies that are often regarded as local companies with local capabilities. Australia stands out as a critical market for Swedish companies, with a growing economy, albeit the hiccup of covid-19, the long-term trajectory is good.

In reference to issues that we need to pay particular attention to in a global trade perspective, Ambassador Cederin refers to the shock that we have seen to supply chains and the tendency that we have seen to reassure local supply chains, politically labelled as strategic autonomy. “This portrays a challenge to increased openness. The fear that this crisis has instilled in this market has been seen in many governments around the world. We have to be active in advocacy for open trade” said Ambassador Cederin. Ambassador Cederin continued “We know that in Sweden, we built our strong economy on open trade and our firm belief is that it [open trade] will be helpful for all countries”. 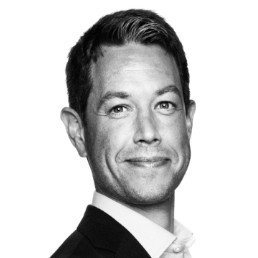 Martin Ekberg said that there are six major shifts that we now see in the Australian business landscape that have been accelerated due to covid-19. Some already ongoing pre-covid-19 but some have increased and they are; the upgrade of Australian defence capabilities, fast-tracking of key infrastructure and the focus to drive local manufacturing competitiveness. More industry agnostic shifts such as the uptake in zero emissions technology, uptake in digitalisation and cyber security but also a growing ambition to diversify Australia’s trade footprint in terms of trade partners, are also recognised shifts. “Covid-19, as well as the trade conflict between the US and China, has exposed Australia’s trade vulnerability,” said Martin Ekberg. Australia’s high dependability on China has hit Australia very hard. Martin Ekberg also referred to the trade restrictions imposed by China on Australian exports and predicted that these may well continue, which will create a lot of economic uncertainty. This emerging situation should mean opportunities for Swedish companies, Australia already is the 4th largest export market for Sweden outside of the European Union.

Another area with growth potential that Martin Ekberg would like to stress, is smart manufacturing. Sweden has a solid track record in smart manufacturing, an area that has been somewhat neglected in Australia (Australia ranks the worst compared to other OECD countries). Manufacturing self-sufficiency is therefore an opportunity for increased bilateral knowledge exchange, which will assist in making Australia a manufacturing hub. Adaptation of new technology which will enable industry 4.0 and also offers an opportunity to build a local supply chain. “This could be the right time to rethink production strategy,” said Martin Ekberg. By way of advice for Swedish businesses looking at investing in the Australian market, Martin Ekberg could conclude a few areas for businesses to look into.

“The transition to a more sustainable Australia offers a lot of opportunities for Swedish companies to pioneer sustainable solutions in Australia.” Martin Ekberg also highlighted that there has been a shift on how we phrase the word ‘domestic’ as it is no longer only referring to having a local presence. Having a domestic operation also entails local investment in r&d, in manufacturing but also looking at export opportunities from Australia to the regional market. Other aspects for businesses to consider is to stay premium as it will always deliver value and to stay close to customers. Another recommendation is to acquire local knowhow, a local knowledge ecosystem of sorts, maybe through acquisitions. 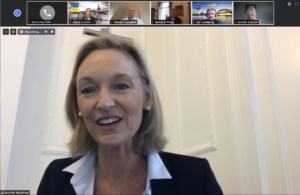 Jennifer Mackinlay commented that despite the overwhelming challenges engendered by Covid-19, the pandemic has triggered a lot of new opportunities including potential opportunities for reinvestment in Australia. Challenges to supply chains have seen a renewed focus on resilience which in turn has underscored the role and acceleration of digital technologies as well as new technologies such as 3D printing. Australia’s renewed focus on manufacturing and digital technology across all sectors is creating opportunities for example in tele-health, telework and online education which is fast tracking the digital economy. “These strategies will help with Australia’s economic recovery but will also underline the compelling business case for investment in Australia,” said Jennifer Mackinlay.

Australia’s Low Emission Technology Statement, is recognised as another opportunity for Swedish businesses. The Australian Government is investing in the next generation of energy technologies that will deliver lower emissions, reduced costs and more jobs. With Sweden considered a global leader in this regard, Swedish businesses will be well placed to leverage this opportunity. One of the prioritised technologies in the Low Emission Technology Statement is clean hydrogen. The National Hydrogen Strategy released in 2019 sets out the initial actions needed to support an emerging domestic industry. The Australian Government’s new $1.9 billion investment package in new energy technologies includes new commitments that will support hydrogen, including $1.6 billion in new funding for ARENA, a $74.5 million Future Fuels package, and a $70.2 million to activate regional hydrogen export hubs. The National Hydrogen Strategy complemented by the Technology Investment Roadmap and Low Emission Technology Statement will enhance Australia’s energy security, will create jobs and build a hydrogen export industry.

Swedish companies offering hydrogen technology looking to invest in Australia should also explore opportunities to get involved in the hydrogen strategy pursuant to which Australia aspires to become a world leading hydrogen producer. Jennifer Mackinlay also mentioned the circular economy as another area where there is scope for Swedish investment in Australia, following Australia’s one billion dollar commitment to the transformation of Australia’s waste and recycling capacity. 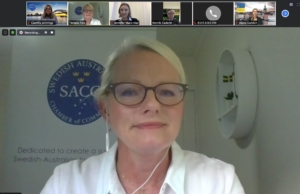 This session was moderated by Teresia Fors, Vice President of SACC.

Listen to the full webinar and the interactive Q&A session here.

The SACC and ABCS will continue this collaboration and aims to bring you another webinar in the near future where we will take a deeper dive into some of the topics raised during this session.

Keep your eyes on the SACC socials Linkedin and Facebook for further updates as announcements are made about future events, and check out the Recent Events and Webinars page on the SACC website for summaries and recordings of our recent presentations. Please contact us for questions and further information: sacc@swedishchamber.com.au.